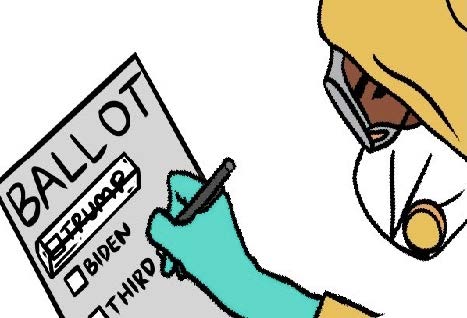 On Friday, October 1, President Donald Trump and First Lady Melania Trump both tested positive for COVID-19. President Trump experienced a much more severe case, undergoing a high fever and low oxygen levels, prompting his transportation to Walter Reed Medical Center where he was administered dexamethasone, a drug used in more serious cases, along with “cutting-edge” intensive and precautionary treatment. The president then left the hospital on Monday, October 6, and resumed his campaign trail the next week, amid criticism that he still refuses to take the virus seriously.

Although many of the president’s aides initially thought that he would reemerge from his infection with a possible newfound sympathy for the virus’ impacts, President Trump has shown no sign of slowing in his hopes to reopen the country and lessen social distancing, even filling his schedule with additional rallies. Besides the surface level precautions, such as moving certain events online and instituting mask-wearing protocol for the Whitehouse staffers, his general attitude, and thus the attitude of his devoted supporters, has not changed much. In terms of public opinion and the upcoming election, it would seem that such events would place the president’s contraction of the virus, along with his controversial handling of the pandemic as a whole, at the forefront of matters right as voting commences. Thus, this would most likely be interpreted as a hard blow for the incumbent. However, many have even used the disease’s presence in the Whitehouse as a reason to lessen public health restrictions and move forward with opening schools and businesses. Rep. Gaetz went as far to state, “There is no lockdown that can be a panacea to save everyone from everything,” reasoning that, “If this virus can get into the Oval, …the body of the president, there’s no place where it could not possibly infect one of our fellow Americans.”

Additionally, the diagnosis has drastically changed the debating environment of this year’s election. Although President Trump was originally set to debate with Democratic nominee, Joe Biden, on October 15, Mr. Trump’s positive test led to this being reworked into a virtual format. Despite what seemed a solid plan, Trump refused to participate, claiming that Biden would cheat, “relying on his teleprompter from his basement bunker.” Rather than attempting to reschedule the second presidential debate, thus maintaining the traditional three-debate system of the past two decades, planning efforts have moved on and it was announced that the third be held on Thursday, October 22, at Belmont University in Nashville, Tennessee. In reality, the effects of this turn of events could have greatly varying degrees on how the election and remaining presidency plays out, but only time will tell.