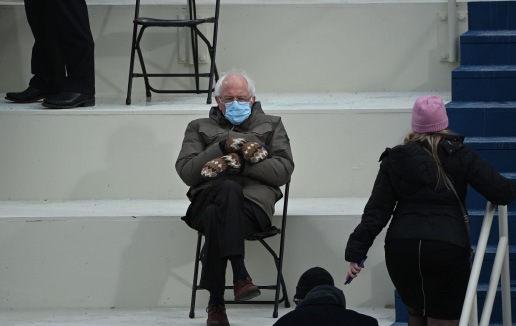 An image of Senator Bernie Sanders at the inauguration in a folding chair with his legs and arms crossed and bundled-up in his now famous recycled wool mittens has blown up online. Bernie’s internet fame stems from the many memes circulating the internet that photoshopped him into various pictures such as The Last Supper, under under the sorting hat from Harry Potter, or as the fly on Mike Pence’s head. A crocheted doll of Bernie sold for over 20,000 dollars on Ebay and even official “Chairman Sanders” merch has been made this past month. Both organizations that created official merchandise donated their proceeds to Meals on Wheels.

History teacher Holly Lorencz enjoys editing Bernie into images of historical significance and using them as her Zoom background (which she changes daily). Her favorites are below!

However amusing the Bernie meme may be to Ms. Lorencz, her student Liv Acree (‘23) feels that Sander’s humble clothing and blue disposable mask conveyed a more serious message. Acree noted that Bernie is “consciously recognizing his place in society” as an “everyday citizen, rather than the other politicians and family who wore designer clothes.” She added, “The image is funny to toy around with, but in all reality it’s very disheartening seeing the man who time and time again has failed to get in office recognizing that he is no one special.”